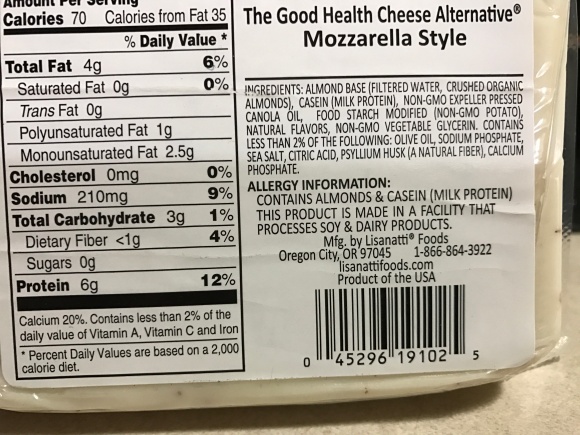 Whoa. Steve bought this thinking of course that it was vegan. Who wouldn’t at first, second or even third glance think the same? That was the intent. To fool you. When companies try to fool you with labels and advertisement, beware. 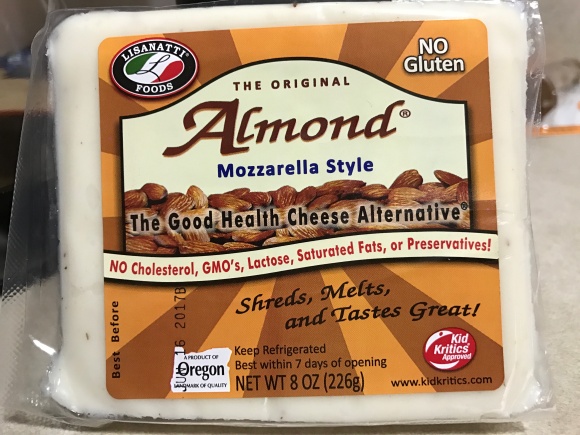 Companies like Lisanatti Foods are trying to get vegans back to the vegetarian trough. They steal everything that so-called vegans are into: gluten-free, no cholesterol, GMO-free, lactose, saturated fat and preservative-free to make it look like their product is made for people with a conscience.

They then consider that the most difficult food for vegans on Facebook to give up is cheese. That’s where they get their research from – Facebook. They simultaneously consider the food fear of most so-called vegans being not getting enough protein. Lisanatti Foods adds just enough milk protein to allay all fears, which translates to fear of eating milk protein.

The cheese tastes terrible. Textures terrible. It actually tastes like an infant’s milk vomit smells. One must wonder how someone could make a terrible cheese when the second ingredient listed on the label is milk, which means there is a lot of it in this cheese.

Why would they even have to say it melts, when it’s made from dairy? All dairy cheese melts. Again, they want the label to look vegan. Vegan cheeses say that on their labels, because one doesn’t expect plant cheese to melt.

This company must think that vegans are really stupid, but then again, this is not a vegan cheese. So that leaves the rest of you in the ‘easily had’ department in their eyes.

Dairy is poison. There is nothing healthy about dairy. Do not buy this product – even if you’re not vegan.