“ANTIFA 365 supporters/protestors wear the ghost face from SCREAM, a series about a killer who hid his identity while committing serial murders, or the Guy Fawkes mask – a stylized depiction of Guy Fawkes who plotted to blow up the House of Lords in Britain. both masks are donned for the purposes of hiding the wearer’s identity and terrifying those they encounter while masked.” https://happywhitehorse.com/2016/03/13/a-call-to-act/ 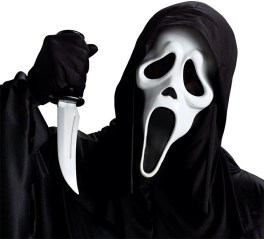 When people show up at animal rights rallies wearing these masks it gives the cause a bad name, and a further reason for those uninformed to call animal rights supporters terrorists. The optics aren’t conducive to facilitating social change regarding the rights of animals.

The current white/ghost masks cover the entire face, including the eyes and they’re not easy to look at. They make people turn away rather than embrace. It’s human nature to do that.

The Animal BALACLAVA Face Mask, however, is a conversation piece in itself. It’s a door-opener, not a door-closer. They’re cute. They don’t cover the entire face. The eyes are very visible, so nobody’s fearing you. Plus they’re comfortable in cold, windy weather, keeping out the sting of the harsh air.

Instead of wearing a Guy Fawkes or ghost mask to simply scare people without a message attached, which is a hollow free-floating goal, wear the Animal Mask as a symbol of all the animals you seek to protect through your consciousness raising activities. One is a symbol of terror, the other is a symbol of compassion. Some of the animal masks look scary, but with your eyes as part of the costume, the scary melts away the fear of animals that many humans have.