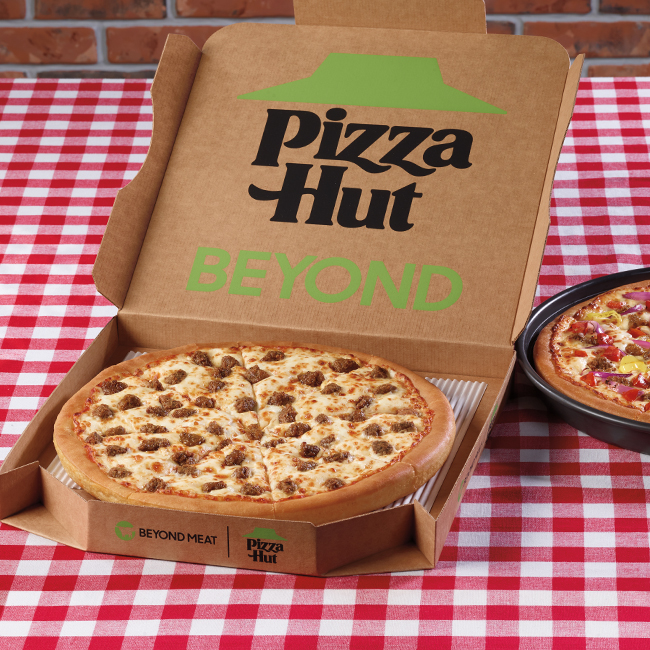 • The pizza in the ad photo has animal cheese on it along with the animal-free sausage. They should have called it the half and half pizza instead of Beyond Pizza.

TAFC Review: Steve emailed me a link to Pizza Hut that now was selling the Beyond Sausage Pizza. There’s a Pizza Hut right across the street. Years ago Pizza Hut came out with this vegan variation of their pizza, where they drizzled Balsamic glaze over the top of a cheeseless, meatless pizza. I walked over to have a look and they never heard of it. The people working didn’t even know what vegan was. I figured it was a franchise store, so never went back. The outside was an eye sore in the area. It looked like they were dumping their trash into the trash bin at the bus stop and it made a mess, always overflowing.

Anyway, I tell Steve, why don’t you go take a look and see if they have it. Sure enough they did. What a shocker! So there is hope for the neighborhood.

Steve ordered the Great Beyond minus the banana peppers and cheese. Pan pizza. It was surprisingly good.

Although I prefer a thinner crust, and next time I’ll get the hand-tossed, the dough was airy and puffed up around the edges.

Steve thought there was too much sauce and not enough oil, so next time we’ll go light on the sauce and add our own extra virgin olive oil at home. For decades now people have been served pizza with not much oil, which to me is part of the enjoyment of it. Red and greasy. Good oil though.

We had some Follow Your Heart parmesan cheese (plant), so dusted the top and microwaved it for about 15 seconds, so as not to toughen up the dough.

I had the last piece leftover the next morning and liked it just as much – just like old times, we’ve got our pizza back and right across the street.

To me it doesn’t make any sense to do this halfway thing everybody’s into. Animal-free meat and animal cheese. Is it so expensive that they can’t find a vendor from which to buy dairy-free cheese? It’s a little insulting that they care so little about their vegan customers that they want to keep them out by making a dish half vegan.

Somebody told them vegans don’t eat at these types of restaurants, which is a total lie. Those vegans on Facebook simply want to push them to do more. Well, why not do more in the first place so there’s no need for a push? No one’s going to demand separate kitchens, but boy they sure were ready to cash in on this plant meat that the vegans en masse are responsible for pushing their way. So, show some respect. Get a plant cheese. Make a deal with daiya for shredded mozzarella or cheddar.

I don’t even know if their barbecue sauce is vegan, since when you call nobody knows anything, they just work there, but if it is, then I’d order a hand-tossed barbecue with peppers, onions, pineapple and sausage. And vegan cheese please. Now I could go for that pizza!

Well, I just checked online and the barbecue sauce has honey in it. I thought the planet was supposed to save the bees and stop enslaving them for their honey? Wasn’t there a shortage of bees? So much for the bee story. Not severe enough evidently for enough people to care. They will when they begin to go extinct, and there’s no one to pollinate the flowers.

But wait, along my research journey I discovered, quite by surprise, that plants can pollinate themselves – the wind does it. The wind passes the pollen from stigma to antler. So we don’t need the bees after all? It seems that some plants depend solely on bees to do it. Then what role does the wind play in those instances? None?

I don’t know, but I stay away from honey or any slime excreted by an insect. I never did like honey anyway. My mother loved it – once a year in summer she’d go to this place to buy honey and the honeycomb. I took a little dab, didn’t like it and certainly steered clear of the honeycomb. You eat that, I asked? It looked like wax. Oh she loved it and evidently a lot of other people do as well.

Hey, I figure if Pizza Hut refused to add a vegan cheese to their meatless meat pizza, then there’s no way that they’ll switch to an animal-free barbecue sauce.

So Pizza Hut Goes Beyond, but not far enough to please the pizza loving animal-free people. Pizza without cheese? Come on. Who are you trying to kid?

Pizza Hut basically introduced an animal-free cheeseless pizza. Nothing difficult about that. The cheese is what makes a pizza, not the meat.

Pizza Hut, the brand known for changing the pizza game, is at it again! This time by partnering with Beyond Meat to become the first national pizza company to offer a plant-based meat pizza coast-to-coast.

You’ve got to taste it to believe it, and you’re in luck because Pizza Hut is now offering two new Beyond Pan Pizzas available for limited time, while supplies last.

The new Beyond Pan Pizzas include:

Source: PIZZA HUT GOES BEYOND – Beyond Meat – Go Beyond®