All you need is:

3- a shot of Grade A maple syrup, room temperature or chilled

Yes, maple syrup. Now that’s an ice-breaker that gets everybody talking.

Lots of people go to bars and taverns who don’t drink or who quit. Why not make them happy? Too much sugar in a shot? Not for me it isn’t. Let’s get the diabetics in on this developing debate.

But why? Why do we have to produce everything so that a diabetic can consume it? They drink alcohol; this is for those who don’t. And for those who do, who want something sweet without the alcohol for the purpose of prolonging their alcohol high.

Or let’s just get high on maple syrup. It must be real. One hundred percent from the tree sap.

Liquor companies attempt to make maple flavored spirits, but it never works. Put the maple syrup in the drink – on rocks or straight up, however you like. Not at the factory/distiller level, at the bar/restaurant/tavern level.

Add some non-dairy nog or creamer and you’re making the White Russian people envious. No bourbon. Use whiskey or rum. No vodka.

I can see only one problem. You probably couldn’t keep it in stock. Employees would steal it and sell it on the street at half the price. Boosting Grade A maple syrup! It’s in.

Others will take a hit every time they open the bottle for a customer. One for them, one for you. People won’t get suspicious, because you the ‘tender won’t be acting drunk.

No kidding, try it, then wonder why nobody sells it, except in a bottle at a grocery or specialty store.

The demand might be higher than the producers could provide. Something to think about.

I can see ‘tenders trying to dilute it with Aunt Jemima-style syrup. This could be big. If I can already see the corruption possibilities I know you can to, which means it has lucrative potential.

I’d also try mixing a little pink Himalayan salt in with the sugar for the rim. Not much.

Oh, and 2 exact drops of liquid smoke in the syrup.

NO. You can’t have any pancakes!! Pretzels maybe. 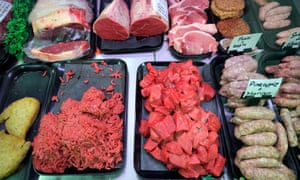 Taxing red meat would save many lives, research shows

A ‘sin tax’ on meat products such as beef, lamb and pork is inevitable in the longer term, say some experts. Taxing red meat would save many lives and raise billions to pay for healthcare, according to new research. It found the cost of processed meat such as bacon and sausages would double if the harm they cause to people’s health was taken into account.

Governments already tax harmful products to reduce their consumption, such as sugar, alcohol and tobacco. With growing evidence of the health and environmental damage resulting from red meat, some experts now believe a “sin tax” on beef, lamb and pork is inevitable in the longer term.

The World Health Organization declared processed red meat to be a carcinogen in 2015, and unprocessed red meat such as steaks and chops to be a probable carcinogen. However, people in rich nations eat more than the recommended amount of red meat, which is also linked to heart disease, strokes and diabetes.

The new research looked at the level of tax needed to reflect the healthcare costs incurred when people eat red meat. It found that a 20% tax on unprocessed red meat and a 110% tax on the more harmful processed products across rich nations, with lower taxes in less wealthy nations, would cut annual deaths by 220,000 and raise $170bn (£130bn)…

Just because there’s no science to support a particular claim, doesn’t mean the claim is not true or accurate.

‘No science to back it up’ many times connotes a hidden agenda to maintain the status quo by advertently keeping the science out, which in turn becomes beneficial to a particular ideology, group or individual or business.

If it’s a killer ban it. If it costs billions of dollars a year for health services, lost wages, lost families ban it. If it’s that bad, and all now agree that it is, then stop manufacturing cigarettes. If nicotine has a medical benefit, then find a different delivery system than an inhalant.

Why are nicotine patches so expensive? Why is nicotine-laced gum so expensive? Don’t these industries have enough money? Can’t they come up with a more creative way – like the marijuana industry did – to deliver their drug without having to inhale it?

Because the tobacco industry wants to grow tobacco. It’s the tar that destroys the tissues. They know it, that’s why they invented electronic cigarettes, but there are too many glitches and people still go back to the smoke, because it’s still sold everywhere.

Oh, and they export cigarettes to other countries, wanting to addict them and make them keep wanting that which makes them sick, so they can keep profiting from their tobacco fields. Of course if they sell it abroad they have to sell it here. They don’t want to look like hypocrites.

I’m seeing too many circles here.

You can’t keep having it all ways, every way, your way. Let tobacco go the way of the dinosaur. Extinct it. If a person wants to grow tobacco in their own yard, then okay, let them do it their way. It’s a plant. They can shove it up their noses if they want to, but Not For Sale. Not to make profit from another person’s harmful-to-the-body addiction.

The Insurance Industry needs to stop punishing smokers when they’re the ones who made a deal with the Tobacco Industry that keeps them in business. Congress bought into all of it. Take the blame away from Tobacco, Insurance and Congress. Keep tobacco growing in the fields, keep manufacturing cigarettes, keep the poor slobs addicted, raise their premium rates and punish them financially forever – even if they smoked even one cigarette their entire life, because the Insurance Industry found the science that supposedly proved that one cigarette could cause cancer – even if you smoked it fifty years ago. So they can deny you benefits based on their science.

You smoke at your own peril. After they addicted you, they drop you flat. No one gets punished except the smoker or quitter or those exposed to second-hand smoke.

What’s the first thing that shows up on your medical record under your name? Your smoking history, which means you are discriminated against by the Healthcare Industry based on your smoking history. Doctors are trained to trick you when asking about that history. When did you quit smoking is the question, not do you smoke?

So it looks like if you can drink it, it’s okay. It’s both legal and encouraged.

Let’s make some nicotine drinks then. Good sell. Great idea. People love to drink. They can’t stop drinking. They always have a beverage of some sort in their hand.

Make it healthy with a healthy dose of nicotine. Varying doses. Do it before Canada does it.

NIC-O-TEEN TEA. NIC-O-TEEN JUICE. Not tiny little bottles that they sell at the check out counter. Those make you look like an addict. Build a display in-store on the floor, end cap. Sell sell sell.

Then ban the production and sale of cigarettes in the USA inserting the personal use clause. If you really don’t want to be a hypocrite, that is.