TA-FC ClipBoard: So what does the world need now that we know about the high demand for ground cow beef? Lotza ground plant round!!

Feeding the demand for ground beef

Ground beef is such a staple in American diets and culture that it can be easy to overlook its role in the bigger picture of U.S. beef production and marketing.

U.S. beef consumption last year was 58 pounds per capita, according to Derrell Peel, Extension livestock marketing specialist at Oklahoma State University. Of that, ground beef represented about 26 pounds, or about 45% of total domestic beef consumption.

In some ways, ground beef is to the overall beef complex what the stocker business is to the overall cattle business for both consumers and producers. Both aggregate related but diverse raw material and blend them into a more homogenous product of greater value. Both also serve as a shock absorber of sorts, leveling out the seasonal ebb and flow of supplies, so the product is available year-round.

When it comes to beef trim, for example, Peel notes that peak steer slaughter usually occurs from May to late June. Peak fed heifer and beef cow slaughter typically peak in the fall. Most dairy cow slaughter occurs toward the first and last quarters. Bull slaughter — a miniscule contributor to total lean trim volume — comes mostly in the summer.

Plus, ground beef production, similar to the stocker sector, contributes to maintaining relative price relationships because of the ability to warehouse product and use products of various kinds.

“Ground beef is one of the major ways the entire beef complex maintains balance,” Peel says.

There’s nothing simple about it, though. Ground beef represents a complex production system within the hypercomplex cattle and beef industries.

Similar to figuring a least-cost ration for cattle, Peel explains those in the meat business mix and match a menu of lean sources to arrive at a specific percentage lean ground beef product for the lowest possible price.

“The most economical formulation for ground beef will change with changes in relative prices, market conditions and product demands,” Peel says.

Food service — restaurants, schools, institutions and the like — account for about 54% of total food expenditures in the U.S., according to Peel. Beef products flowing through this chain are often bulk- packaged and then further processed for portion control. Ground beef in this sector uses domestic fat trim, along with fresh and frozen domestic and imported lean beef trim.

Conversely, retail grocery represents about 46% of total U.S. food expenditures. Much of the beef in this supply chain arrives at retailers in case-ready packaging, ready for labeling. Ground beef here is comprised mostly of domestic, fresh lean and fat beef trim.

Over the years Peel hears a common question: Why do we import beef? Don’t we produce enough here at home?

“We produce plenty of beef, but it’s not in the right proportion of products relative to our demands in the market,” Peel says. “To maximize value in the industry, we support our ground beef market with imported lean beef trim.”

Then Peel walks the questioner through some numbers.

Incidentally, Peel says about 72% of all beef imported to the U.S. goes toward domestic ground beef production. He explains about half of U.S. beef imports last year came from Australia and Canada, followed by Mexico, New Zealand and Brazil.

“Roughly, it takes the trim of one cow to add to the trim of one fed animal. We slaughtered 6.4 million cows in the U.S. last year, and 26 million fed steers and heifers,” he says. “You begin to see the challenge right away

“We would have to slaughter about twice as many cull cows in the United States to replace the imported trim and still make everything balance with this huge volume of fatty trim that we produce in the fed cattle industry.”

There are options, all of which come at higher cost and provide less value.

The U.S. could maintain current levels of ground beef production by utilizing more muscle cuts, which have more value in other markets.

You could also run 10% to 15% of the yearlings as range beef and market them for values similar to cull cows.

“All of those alternatives would result in lower value to the U.S. cattle industry,” Peel explains. “The way markets work, we are increasing total value to the industry by sourcing lean where we can get it cheaper to meet the needs of that market, while letting other products that could be used as a source of lean go into other markets where they have a higher value.”

The United States is a net beef exporter on a value basis. This year, for example, the latest quarterly Outlook for U.S. Agricultural Trade from USDA’s Economic Research Service projects beef and veal exports at $7.2 billion, with beef and veal imports of $6.1 billion.

“Therefore, 11.10% of total U.S. beef production in 2019 was exported, and 11.21% of total U.S. beef disappearance was sourced from imports,” Tonsor explains. “There is a -0.53 correlation between annual export and import flows consistent with imports increasing when exports decline, and vice versa.”

“While this may be surprising, this synergistic relationship reflects differences in products involved, the role of imported products as inputs (commonly for ground beef production) into U.S. domestic consumption markets, and value differences associated with these volume flows,” Tonsor writes. 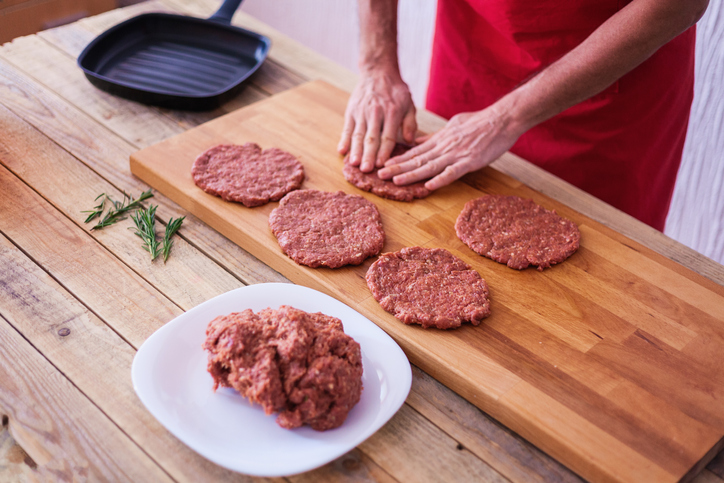 TA-FC ClipBoard: So what does the world need now that we know about the high demand for ground cow beef? Lotza ground plant round!!